Ike, the rain, and Mother Nature

Well, what are we going to do about Mother Nature? Did we bring this on ourselves by trashing the environment and warming up the planet? Surely we can co-exist peacefully and sanely with the environment but all these hurricanes are starting to make me nervous. I think the hard thing is that I (and I'm assuming all of you) really can't do much about it. Sure I can try to be a good steward of the planet by recycling, reusing, driving less, etc. And I believe that if we all do that it will surely help. But the big corporations, are they doing their part yet?


Okay, I didn't mean to start finger pointing about global warming but we just had one of Hurricane Ike's feeder bands come blasting through with such ferocity that I was shocked. And I'm thinking of my immediate family, most of whom live in Houston. I was just down there last weekend and saw some rather interesting Man vs. Mother Nature type of occurrences. The first one was a Cooper's Hawk landing in my sister's backyard. He/she was attracted by the bird feeder and zillions of squirrels. 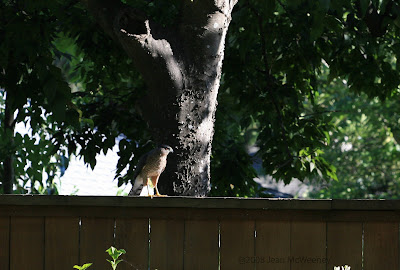 The other thing I saw was a whole family of Black-bellied Whistling Ducks in the retention pond at my parents' apartment complex. The pond is lined with Bald Cypress trees and apparently several months ago the two parents were spotted hanging around the pond and then sure enough, a whole set of ducklings appeared shortly thereafter. I believe my parents said there were a dozen of them at first. There are eight now and they're getting really big. I hope you can see them in this picture. The ducklings are between the parents and no, those aren't cypress knees but large ducklings. 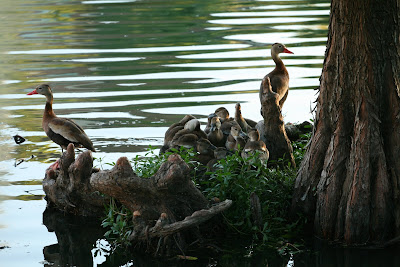 So... it seems that sometimes man-made environments will suit Mother Nature just fine. So Mother Nature, why send us this hurricane??
Posted by Dig, Grow, Compost, Blog at 3:07 PM