How do I tell the story of Bloedel Reserve? I can only tell you of the impressions this beautiful garden on Bainbridge Island made on me, and hopefully show you through some of the few photos I took how I felt. Bloedel Reserve was our last big outing of the Seattle Fling for garden bloggers. To say that the whole experience exceeded my expectations is no exaggeration. But I'll save the telling of the Fling experiences for later. Meanwhile, join me on this rainy day in Bloedel.

The photo of the lawnmower is a bit of joke. I was in the first group who attended the three photography workshops given by David Perry (the fabulous garden photographer and funny man to boot), and we were constantly assaulted by the sounds of mowers going as he spoke (it was the one day per week the Reserve is closed, so naturally it's when some of the heavy work gets done). The finally silent lawnmower was the first thing I encountered when I left the visitor center to shoot photos.

I spent most of my time near the Japanese garden. The sense of peace there was palpable to me. Wherever I turned I saw majestic trees and the slight hand of man.

Rain and lack of a Death Star means gunnera grows quite large there.

But many small things grow in Bloedel as well. 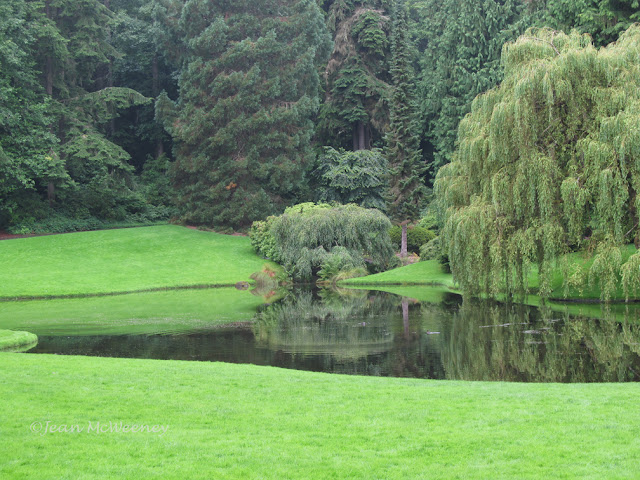 Near the visitor center is a Japanese guest house (the Reserve was only established in 1988, two years after the Bloedels lived there). One of the powerful aspects to Bloedel is the way in which each scene invites one to further exploration. Leaving the visitor center I saw this large pond and little glimpses of other interesting things to come beyond the pond.

Sure enough, the guest house appears.

Just outside the guest house is a traditional Japanese dry garden, very serene and meditative. I spent some time around the guest house, just imagining what it might be like to stay a long time there.

Each step took me farther into tranquility as the light rain muffled sounds and deepened the green.

While I was sitting and contemplating the beauty, I realized I had only one shot left on my camera (long story but my digital SLR died that day and my compact camera only had room for a few photos). So what would be my last photo of the Fling experience? Because I was in such a peaceful frame of mind, and because I wanted to shoot into the light (inside joke), I thought the raindrops on the pine tree I was near would be perfect. And so I hope my last photo brings you peace as well.

But one more thing - I want to leave you with some interesting facts about Bloedel Reserve. Prentice Bloedel took over the helm of his family's timber business but retired early to work on his property. This is from their website:
"Prentice Bloedel was a pioneer in renewable resources and sustainability. He was the first to use sawdust as a fuel to power his company’s mills. He replanted clear cut areas, and started a company that marketed fireplace logs made from sawdust. He also was deeply interested in the relationship between people and the natural world, and the power of landscape to evoke emotions ranging from tranquility to exhilaration. Indeed, some believe that due to his early school experiences and his bout with polio as a young man, Prentice Bloedel may have been ahead of his time in his understanding of the therapeutic power of gardens and landscape."