Of birds and bees and other natural things... 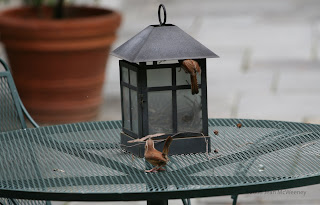 All this wildlife in my backyard has got me thinking about what I like about gardening and why people garden in general. If you are like me, a big reason for gardening is just to commune with nature. To create a welcoming place for the other creatures we share the planet with. To have an excuse to get outdoors (when the heat and humidity is blasting away, it's easy to hole up in the air conditioning).
When we first moved to this house and yard, the backyard was pretty much a large expanse of nothing. There were a line of trees and bushes towards the very back of the lot and a small garden near the old deck with daylilies and daffodils (and lots of weeds). What wildlife I saw was way up in the trees. I used to get my binocs out and scan for anything interesting.
But now that I have a "proper" garden, the wildlife is everywhere. I've got birdfeeders, a birdbath (or beebath), a bubbling water pot that's favored by the mourning doves, a hummingbird feeder, a woodpile that's favored by the lizards and wrens, and lots of plants that I'm hoping will draw the butterflies and hummingbirds. The salvias and Verbena bonariensis have been drawing the hummingbirds but I'm increasingly frustrated with the lack of butterflies. I plant lantana and pentas for their nectar and dill and parsley as larval habitat but I still don't get many. No larvae at all. My hypothesis is that no one else in the neighborhood has a flower garden so they just don't hang around here. I know they're down a few blocks at the local nursery but I can't seem to entice them to travel far. So I guess my next big crusade should be to get more folks in the 'hood into flowers favored by butterflies (azaleas don't count).
Here's a little pic of some Carolina wrens making a nest in my lantern in May.
Posted by Dig, Grow, Compost, Blog at 10:52 AM