Of Mulch and Tidying Up


This weekend we had some wonderful moderate temperatures, perfect for tidying up the garden before spring. My chives had been telling me that they needed a haircut real soon (the older leaves were all laying down while a few new young ones were standing up). Thus I embarked on what I thought was a little trimming up. Naturally, one thing led to another... and before I knew it I was finally tackling cutting back the rosemary. (This rosemary (unknown variety) had been a wee little thing when first planted almost three years ago. But it slowly started forcing itself into the gravel paths, sometimes taking root there.) Why did trimming the chives lead to whacking back the rosemary? Because once I cleaned up the chives, the bed looked lovely and pristine AND way too tempting for the squirrels to start digging in. 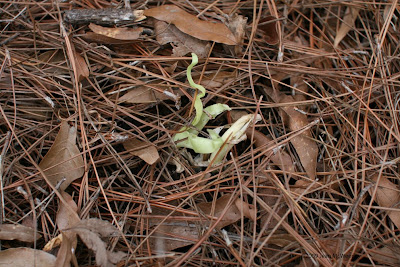 So I needed mulch to keep the tree rats away and protect the soil from our occasional deluge-type downpours. The most common form of mulch around here is pine straw. I encountered pine straw when I first started gardening in the little weed-strewn flower bed I inherited. I really didn't like it that much because it was hard to pull the weeds without pulling up the pine straw with them. Of course I didn't realize that probably the previous owners had thrown it down so I wouldn't see the weeds while house shopping! But since that time I've come to appreciate it for staying put. I tried pine bark mulch but it just floated away during one of our typical storms. So now when I need mulch I usually turn to pine straw. It's a renewable resource if somewhat pricey.

But I don't like pine straw in my square beds. I prefer to have an easy way to get at the dirt and I don't mind the occasional weeding. When the plants are beefed up in the summer, there's usually little room for weeds anyway. So in pondering my dilemma of a box of nice dirt just waiting for those pesky squirrels I remembered a post that Frances did about using rosemary clippings on beds to keep the squirrels out. Okay...so that means finally cutting the rosemary back. 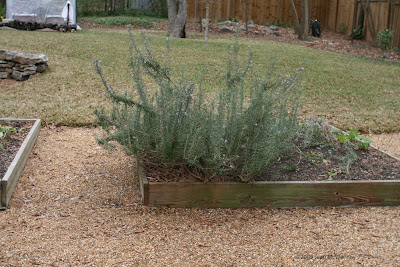 Wow, am I glad I did that. It may look funny now but I'll leave the branches there til spring really springs and grilling season also coincidentally starts. Then I'll just throw them on the grill. Trimming the rosemary also revealed the little stone my sister-in-law painted for me. And so far the squirrels are staying away. :-)

Update: you may wonder why I was dreading cutting back the rosemary. Part of the reason is that it's not as simple to do as with other perennials. Older rosemarys are very woody and if you think just cutting that wood at some point will generate new growth near the cut, you're wrong. So you have to sculpt as you go, making sure you don't leave any ugly cuts exposed. Hopefully any uglies I left will shortly be covered by new growth on stems above the cuts.